Bohdan was born on May 1st in Ivano-Frankivsk, in Western Ukraine. From an early age he was interested in folk music and culture of his region. At age of seven years he started learning the violin and during summer vacations in Ukraine he learned various folk instruments in the village of Lisnyi Khlybichyn, in the Kolomyya region of Ivano-Frankivsk Oblast. In 2003 his family emigrated to the United States. In New York State, at age 9 he started playing the Bandura under the direction of Valnetyna Hnat. Upon quick success on the Bandura he started taking additional lessons with Dr. Victor Mishalow in Toronto, Canada. In Toronto Bohdan came into contact with the world of Ukrainian culture of the Ukrainian-Canadian Diaspora. He was an active member of the Canadian Bandurist Capella and the Bandura Youth Assemble of Southern Ontario.

From 2011-2012 he participated in the Congress-Bundestag Youth Exchange in Hamburg, Germany where he took lessons on the violin with professor Thomas Pietsch, of Frankfurt Conservatory and further music lessons with the German soprano Gloria Bruni. Upon finishing his year abroad Bohdan decided to start his studies in Germany and Austria. During his studies at Jacobs University Bremen and the University of Vienna Bohdan continued lessons on the Bandura with Ruslana and Volodymyr Voyt Jr. and Sr. in Kyiv and with Violeta Dutchak in native Ivano-Frankivsk. Bohdan has numerous performances on the Kharkiv and Chernihiv Bandura with a sizable folk, Ukrainian and western classical repertoire throughout North America (Canada & United States) and Europe (Germany, Austria, Switzerland, Sweden, France, Czech Republic, Ukraine, Hungary amongst others). He has had various opportunities to cooperate with numerous musicians, including Oksana Linie (Graz), Julian Kytasty (NY), Volodymyr Voyt Jr. (Kyiv), Nadia Honcharenko (Vienna) and many more.

In summer 2018 Bohdan finished his bachelor in Slavonic Studies at University of Vienna with a specialisation of Ukrainian, Russian and Polish studies and languages and is currently doing his postgraduate studies at the Vienna Diplomatic Academy. 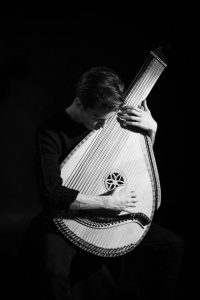 some memories of past performances...